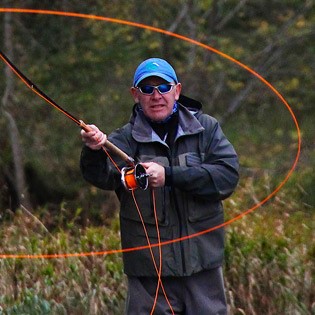 Bill has been a ghillie for over 25 years and has been at Knockando on the River Spey since 2004.  He teaches Speycasting and is regarded as one of the world's finest exponents of the art - winning the Emerald World Speycasting Championship in 2006. He caught his largest salmon, 25lbs, at Lower Pithchroy at Knockando.

Having travelled the world with his fishing rod, Bill started designing salmon tackle for major brands and subsequently launched his own brand in 2012. His designs have been acclaimed, bringing innovative modern techniques to all levels of angler as well as being practical, versatile and user friendly. Bill has fished extensively around the world, with a particular passion for Russia, where he has guided for many seasons.

Bill has given up work on his beloved Spey to assist us in hosting groups in various destinations around the world - Varzuga, Yokanga and Iceland in the first instance and will also be available to instruct on demand and offer invaluable advice to anyone who requires it whilst travelling with us. If you would like Bill to join you on the river or would like to join his hosted trips, please contact the office.

The fishing team at Roxtons