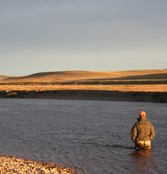 This week the lodge had the pleasure of having old friends over from the UK, the group was led by David Saunders returning to fish La Villa de Maria Behety for the 8th time. Chris B. Mike H. Richard M. John R. and his wife Karen R. enjoyed another year fishing the Rio Grande.

The weather was pretty good, mild but rather windy (on Thursday wind gusts of 85 km/h). The temperatures ranged between a warm 20 and cool 8 degrees Celsius. The dry spell continues, so the river level dropped about 15cm, the water is very clear and its temperature ranged between 14 and 7 degrees celsius.

The most successful lines were Skagit and Guideline shooting heads. The most used tip was T-14 of varying lengths, intermediate, and double and triple density tips.

The average weight of fished improved this week by more than a pound to 10 lbs per sea-trout.

David Saunders landed the biggest fish this week, a fresh 24 pound hen. His personal best fish in over 8 years of fishing the Rio Grande. Congratulations!

The top rod was Mike H. who landed 20 fish this week.