A Special Afternoon on Alphonse Island 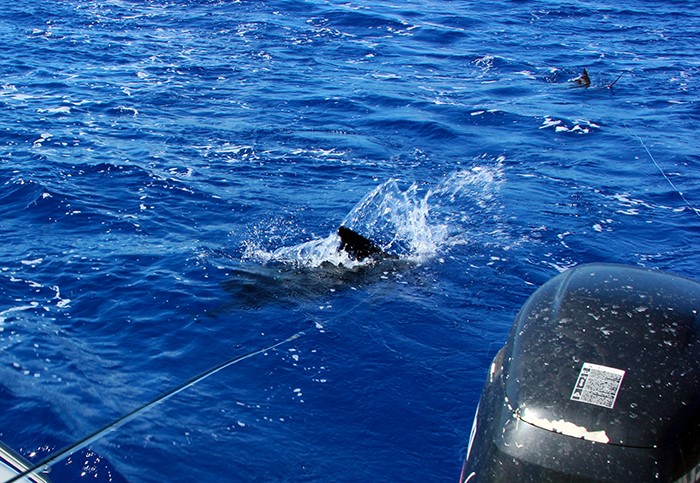 After an early “Flats Lunch” we did something that I did not expect to fascinate me as much as it did. I think I might be a Sailfish on Fly convert!

The flats lunch is a very cool coming together of fishers, non fishers, staff and divers to sit with toes in the water with views of sand and mesmerising blue waters as far as the eye can see. I have to confess to not really giving my undivided attention to the lunch. Something was niggling in the back of my mind. I’ve been fortunate enough to do a bit of blue water fishing in my youth and really was not overly taken by it. This was gear fishing for things that essentially were hooked by the deck hand and then handed to you to play. Frankly we were paying for the hard bit. Therefore I was a little nervous that this was going to be a similar situation and teasing wild creatures to the surface for them to be hooked by the forward travel of the boat was what I expected.

I was wrong and in spectacular fashion. We headed out to the blue water beyond the reef close to Lollipop wreck and began to make slow passes with the teaser. We spent a bit of quite important time stripping the line off the reels, relaying the line so the running line did not catch the belly line and set our drags to full. Not much happened for what felt like ages. In fact it was about 8 minutes before pointy fish noses were piercing the water around the “Belly Flash” lure and everything went into over drive. I’m no caster and certainly not great with a 12wt pool cue style Thomas and Thomas. Add into the mix a flat faced 9 inch Cam Sigler fly! Flats boots and socks are not allowed, neither are mistakes and water hauling is encouraged. One quick flick onto the water, a full body back cast and shooting as far as you can without getting your line wrapped or the fly in you or a deck hand. This is all you have to do but what was a steady bobbing of the boat and watching the teasers whilst enjoying a SeyBrew becomes a flurry of directions, actions and prayers. Whilst all this is going on the calm Skipper is killing the engine and the boat grinds to a halt. The Sailfish get really close really quick and the teasers are gone with just your long line and fly and miles of deep blue behind you. Oh and Pete had cast from the other side and off the wrong shoulder into said blue as well… There is only one thing to do now and that is strip. Long fast and accurate strips that make the popper dance and hop through the falling crests. The sails peel away from the back of the boat and using their vast dorsal fin they turn and come at your fly. There are very few times in life you are not very excited by a big fish making it’s way with pure drive and determination for your fly but at that very moment as the earth stops turning and the fish seems to hover on the point of your hooks you just have time to think “what now?” Carnage is what now. Big hooks and big fish mean you have to set those hooks so keep stripping. This is easier said than done as once that fish feels the chemically sharpened point he’s away and you are not really stripping but hanging on for dear life. The first time I was holding tight and set the hook with left hand and rod hand as hard as I could. I regained about 3 inches and pulled hard again. At this point I realised I was about 15 feet of line through my fingers and the slight warmth in my burned out stripping glove was a good solid burn. At this point you realise that toes and fingers as well as boat parts and reel parts need to be clear as there is no time before the backing is due. And by some weird twist of fate both Pete and I did not have anything caught or anything attached in the line as backing knots reached 100 yards in seconds and some huge silver monsters were literally flying through the air almost exactly 100 yards further on than I had thought they were. Double Hook ups are probably not overly common on the fly for Sailfish. I’ve not looked into it but to land 3 each and have contact with a total of 12 fish in one afternoon has to be pretty rare. These beautiful creatures totally and utterly captivated me from the get go. As my backing, despite heavy palming of the reel, started to run out Dean tickled the boat backwards to avoid a catastrophe. At about 40 yards left the smaller of the two Sails we had on stopped. Another “what now moment” and the stark realisation that what goes out must come in.

Those who know me well will have heard me wax on about how the only hand wind is the left hand wind! And guess what… my loaner rod was set up as right hand wind! Added to recovering 450 yards of gel spun backing by the time it was all over I was in bits. Apart from having to cross over mid fight landing two Sailfish at the back of the boat and getting the two safely released was actually quite simple. We gave them a good few minutes with the boat in drive to put needed oxygen over their gills and then said goodbye.

What was a silver fish at 300+ yards actually becomes a blue and purple and brown and white beauty at close quarters. The colours are truly mesmerising. In order to get a picture of both of us holding a fish each Devan got me into position at the back of the boat and said “hold his bill, don’t let it touch the boat and he might bite you a bit.” Oh good, this sharp nosed predator measuring the same length as me might bite me? What a gentle soul. He literally closed his mouth lightly on my glove. It was almost as if he knew I only had good intentions for him. Lying on the deck as the lactic acid and adrenalin dissipated; I tried to make my right hand work again. Shortly afterwards a celebratory SeyBrew was opened and I settled back to what I assumed was a nice relaxing long wait. “Sailies” the cry came and we were back into bedlam! About the only moment of peace was when we made our way to another spot and I tried to take pictures of flying fish. The whole afternoon seemed to go on for days and every few minutes the peace was shattered by adrenaline, frenzy, line burns and pure mainline excitement.