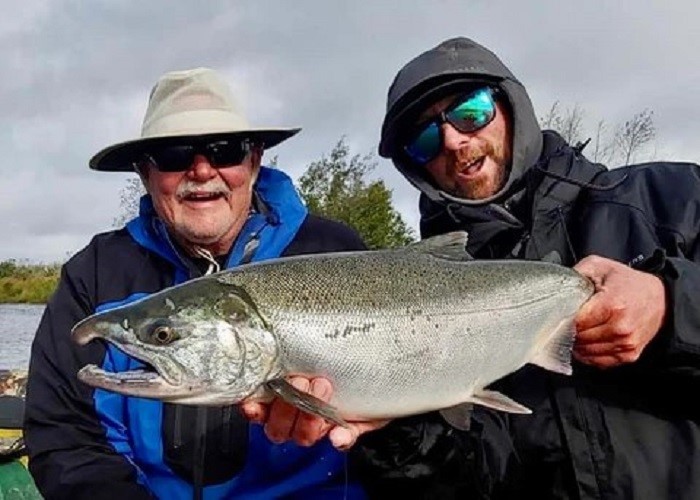 ATA Lodge, situated on the wild and scenic Alagnak River of Bristol Bay in southwest Alaska, had an epic season in 2022. 2022 was the busiest season ever at ATA Lodge and guests had an amazing time experiencing all the fabulous fishing in one of Alaska's most pristine and beautiful locations.

Wayne McGee, who runs the lodge says that June is one of his favourite times of the season because he loves to catch big leopard rainbow trout. You can swing big leech patterns or skate a mouse pattern across the surface of the river, anticipating the next vicious take! The highlight of this season was the fact that there was another record-breaking run of sockeye salmon. Over 79 million sockeye salmon returned to the Bristol Bay rivers in 2022. This shattered the previous record for the most salmon to return to Bristol Bay since records have been kept. You could literally catch and release as many sockeye as your arms were prepared to take!

Lots of sockeye meant lots of bears too. Seeing the coastal brown bears of the Katmai Region is always another fascinating highlight of everyone's time at ATA Lodge. The region has the highest concentration of bears anywhere in Alaska, and you will see more bears than people while out on the water each day.  The bears fishing for and feasting upon salmon are a big draw at ATA Lodge. In 2023 there will be a nature documentary released on Netflix, with David Attenborough narrating, which was filmed in part on location at ATA Lodge in 2021. The bears aren't the only ones to eat well on the Alagnak River, guests do too.  There was an amazing team in the kitchen again this year, and guests were treated to some real gourmet meals every day. Hearty and delicious meals go a long way to helping keep guests fuelled up and ready for all the fun filled days they spend on the river.

As July developed, ATA Lodge started catching chum, king, pink, and even silver salmon as well, with the runs continuing well into August and September.  The Alagnak offers an incredible variety of species of fish to target, as well as a wide variety of fishing conditions to enjoy catching them in. There are substantial runs of all five species of Pacific salmon.  There is over 100 miles of pristine, crystal-clear rivers that are accessible by jet boat from the lodge.

After seeing a significant decline in chum salmon numbers in 2020 and 2021 across their entire range; we were thrilled to see good numbers of chums back in the system again this past season. There had been reports of overfishing in the open seas by Russian commercial fishing boats in 2020, which seem to have swept up two age groups of chum salmon, causing the decline. Some also attributed the decline to slight ocean temperature rises that affected their food sources.  But whatever the cause may have been, we were happy to have these hard-fighting fish back in 2022! Being an even numbered year, the pink salmon came in huge numbers this past season as well.  Pink salmon provide epic days where almost every cast can produce a take and put a bend in your rod! There were a number of guests, who during the end of July and first part of August, got what is called the Alaska Grand Slam, catching all five species of Pacific salmon in the same week, and in a few cases, on the same day! As the month of August progressed, the chums, kings, and pinks continued to come in, with silver salmon (also known as coho) joining the parade in early August. Although the silver run starts off as a trickle, in 2022 the first silvers were landed at the very end of July. By the end of August and moving into September, the lodge saw another great run of silver salmon coming into the river. Silvers are always a favourite target for anglers because of their acrobatics!

But it's not just the prolific fishing and wildlife viewing that impresses guests. There is a feeling that you have the whole river to yourself as you will rarely see another angler or boat. The only access to the entire area is the private runway at ATA Lodge. You step off the plane, and you are surrounded by millions of acres of untouched, roadless wilderness. Whether you are looking to just get away from the crowds or want to catch more fish than you could ever imagine, we are certain that once you've been to ATA Lodge, once will never be enough.