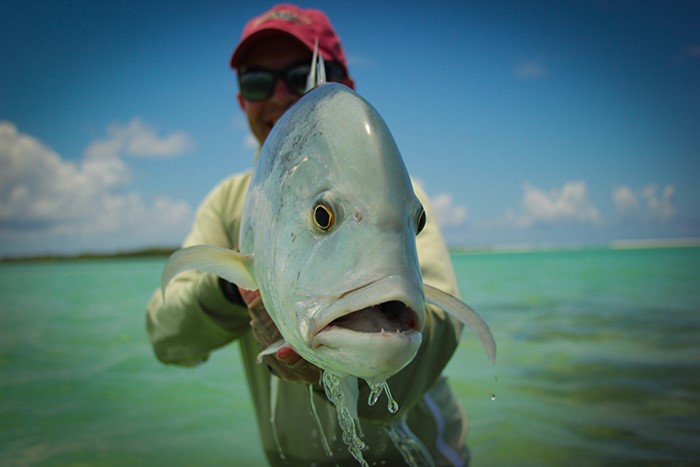 This trip has been a long time coming. I first heard about fly fishing in the Seychelles back in 2000 fishing in the Lakshadweep islands and later learned more whilst guiding in Russia 2005. I was then lucky enough to guide in Iceland with the great Wayne Hasleau. All of these events gearing me towards a great number of failed missions either due to people getting married, new jobs etc etc. Finally this year I made it to Alphonse Island. I have seen the island evolve over the years I have been in the industry and I supposed I would have a fairly good idea of what to expect. I was blown away. Our Emirates flight was excellent but however you dress up 12 hours in a sky tube it’s a tiring prospect. Possibly the easiest part of the trip was the 60 minute trip down to the island from Mahe. We disembarked the IDC flight to a hot dry heat and the enthusiastic welcome of Gordon. In a daze the team loaded up on various golf buggies and we were finally here. The fishing program is a well-oiled machine and begins with a briefing in the newly set up fishing centre bar. “Point the rod, long fast strips looking at your hands” because it seems a GT might be your first encounter. I don’t know about first but I would say I was halfway there by the end of the week. Rods were then set up, flies chosen, discarded or sold and the afternoon “free fish” commenced around Alphonse island. Tides and light conditions did not make this the easiest evening and those who adjourned to the bar would perhaps have been wise had they not stayed there so long. The fishing program on Alphonse is a lot more demanding than I had given thought to. You have to be dressed and breakfast complete by about 6:45am so you can cycle to the fishing centre in time to board the mothership for the 45 minute cruise out to St Francois. Once out there the guides collect you on their skiff and after a short briefing about safety and the boats it’s time to fish. The first day is designed to ease you in gently and we were allowed a few hours to fish for Bonefish on the rising tide as groups of fish pushed out of the deeper water into the shallows to feed. This was a nice chance to experiment and learn a bit about how these magical creatures behave. The afternoon was spend wading the finger flats for triggers who seemed to have the measure of us for the most part. We ended up having a competition to see who could catch the most fish off the side of the flat with a crab pattern. I had 3 refusals before Pete landed 2 Ruby Snapper. Off the mothership that night I grabbed up my bonefish rig and cycled back to the A-frame for a few casts. I soon realised that the fishing program is just about the right amount of fishing as there is precious little time between close of play and supper. Day two was GT day for us and in a way set the scene for the rest of the week. Our excellent guide Olly navigated us into the rear lagoon behind St Francois known as “the back of the moon” and with the brilliant new East Cape Evo skiff poled us round the entire outer reef looking for GTs (mainly). Pete landed two really lovely GTs and I made contact with one very big fish. Going from a seven weight to a 12 weight was quite a challenge but added to the fact I was riding the front of the skiff into the surf and casting was just very poor from my point side of things. It was physically and emotionally draining and we were not even on the pole. At the back of the island we came across a tailing permit which refused to consider 9 different crab and shrimp patterns. The week carried on somewhat in this similar vein with some very close encounters with Permit with guide Stu, a hefty surf walk and a Milkfish session with Peter and a Trigger hunt with Angus. We headed out to try out the excellent Pelagic Bluewater fishing but that warrants a separate report. The guide team and their equipment is second to none. Each guide seems to have his own style and pace which is refreshing. You can really see the guides who have a diverse level of experience at reading the tides as well as the client’s expectations. The new skiffs run extremely shallow and they are stable for casting and handle really well in the narrow channels. The carbon poles transform some of the tougher areas to wade and once the new engines arrive the set up will be spotless. Back on the island the attention to detail is first class. Everyone remembers your name (even when you don’t) and the food, largely made up of fresh caught Snapper and Wahoo, is exquisite especially eaten under the stars. Cycling about really takes you away from the mundane drudge that is modern traffic and evenings like the ICS talk and sundowners cocktail evening give a chance to learn more about the islands and mingle with the non-fishing guests. One couple on their honeymoon had already been to a luxury island and were due to head off midweek to a 3rd. They really could not reiterate enough how much better the smooth, relaxed feel of Alphonse was than their previous slightly sterile experience.

The rooms are excellent as expected and the addition of a Nespresso machine in the rooms and fresh milk in the fridge each day really is a nice touch. Being a slightly OCD person I did struggle with all clothes being arranged and folded each evening as I simply lost track of my system. Outside showering is a really nice touch and gives a chance to hose down all your salt covered garments ready to dry overnight. The island are also going to provide Renzetti Saltwater vices in all the rooms for clients to tie their own flies if desired. I tied a few Alflexo crabs with weed guards at the bar one evening but other than that tying time is limited.

Heading out to the plane at the end of the week felt like a blink of an eye from arrival but line burnt hands and aching joints coupled with a myriad of amazing memories and images tell a different story.

Contact us for more information or to reserve space.

What a funny place Cuba is. The faster the world of technology moves, the further behind Havana seems to be...