Big fish on the East Ranga

I have just returned from my annual trip to Iceland and yet again have been reminded as to what a stunning country it is.

I was hosting a group for whom this trip was the 15th year in a row on the East Ranga  – a testament to the reliability and consistency of the fishing and the lodge.   Whilst the core of the group has remained the same, we had quite a few new faces this year which is always fun and as they were almost exclusively the relations of the existing group, it made for a very happy (and noisy!) party.

One of the main reasons of fishing the East Ranga is to catch serious numbers of fish and we did that again this year but there was one key difference.  The average size of the fish was much, much bigger than normal.  We landed 3 fish over 10kgs (22lbs) and a huge amount between 6-8kgs – fresh off the tide, these fish fought incredibly hard and we lost as many as we landed.

It is a smolt release river and the managers have deliberately only bred from the largest fish and this policy is now really beginning to pay dividends.  If you land a bigger fish, the guide will take it to a box in the river where the fish will be kept until taken away to the hatchery to be stripped.  For making your contribution to the future of the river you will be given two sides of smoked salmon.

All of the smaller fish are taken for the smokery and at the end of the trip; you can exchange the fresh fish for delicious smoked fish at a ratio of 4kgs to 1kg.  We all came home with a lot of smoked salmon which will not only make excellent eating but will also make superb presents.

We took the lodge exclusively which meant that we were 16 rods but very sadly two could not make it at the last minute and we fished 14 rods between a group of 24 so there was a lot of rod sharing which is often the best way to fish Iceland as the hours are very long.

We landed 157 fish in 3 days to the 14 rods but perhaps the most striking aspect was that 6 people landed their first ever Atlantic Salmon – there are very few places in the world where that would be possible in a 3 day period.

The food was probably the best I have had at the lodge with the highlight being fantastic lobster tails and a loin of lamb that was simply delicious.

As ever, the guides were top class and whilst the more experienced rods landed the most fish, everyone improved their casting and every rod caught fish which was a very satisfying aspect to the trip.

There are just not that many rivers left in the world where you can consistently catch large numbers of fish and being able to leave your office on Thursday morning and be back at Heathrow on Sunday evening does mean that it is very doable for even the busiest person.  The East Ranga remains one of our most popular destinations and it was good to remind myself why that is the case.

The river is fully booked for the remainder of the season but if you would like to know more about it for 2015 then please do not hesitate to contact me. 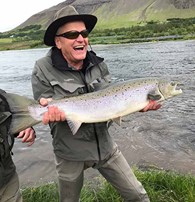