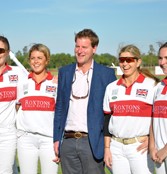 The prestigious event, which celebrates British heritage, tradition and friendship with Mexico, saw polo players from Britain and around the world contest two thrilling games.  Judith Macgregor, the British ambassador to Mexico, threw the traditional ball to start the matches, the first of which saw Eton succumb to a young Mexican team.  However, the English ladies, sponsored by Roxtons Fieldsports and captained by the best lady player in the world, Nina Vestey, fought a hard earned draw against a strong Rest of the World Team.

It was an great day of sport of yet again and showcased the very best of British in a stunning setting. Charlie White attended the day.

Please click here to see a short film of the day.