Charlie White reports from his latest trip to Iceland where the party caught 124 fish in 3 days. 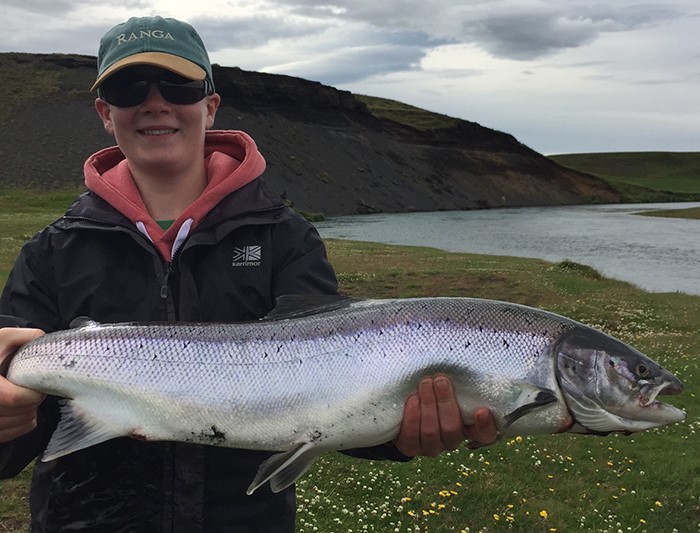 With the world getting ever smaller it somehow seems a bit perverse to continually go back to the same place year after year but having just returned from my annual trip to the East Ranga I can honestly say that I would not have it any other way. The East Ranga is a smolt release river which means that the fishing is generally very reliable but it is fascinating and in some ways “right” that nature still has the upper hand and that you can never take it for granted.

The early season fishing on the river in 2016 was simply astonishing but much colder weather and different conditions meant that the first few weeks of the 2017 season had not gone so well and there was some trepidation as to what we could expect.

However over a delicious, fun and very generous dinner with our Icelandic hosts the night before we started fishing, it was clear that the river was beginning to pick up and if anything we were arriving just as the fishing was starting to fire – too good to be true surely, we are salmon fishers after all and expect to be told “last week”… Well for once the jungle drums were right and 18 rods landed 124 fish in the 3 days that we were there.  A very creditable result and one that would have surely been higher had it not been for the extreme winds that plagued us throughou

The East Ranga is on a flat plateau of grassland and gusting winds can sometimes be a pain but to have almost constant and very strong winds as we did was very unusual and certainly made things tougher than we would have expected.

One of the great things about fishing the East Ranga is that every fish you catch is straight off the tide and some of the fish looked almost white in the water when they were being played.  These fresh fish fight very hard indeed and whilst that certainly contributed to a ridiculous amount of fish being lost, it is fair to say that colder water temperatures than usual probably did not help either as a lot of fish were hooked on the dangle making hook holds precarious. We had a fantastic chef, great guides, logistics that were seamless and a serious amount of fun.  3 days sounds too short but there is a lot of fishing time within that and most of us were pretty tired by the time we finished.

Sharing a rod is unique to Iceland and it was wonderful to see so many father and son/daughter teams with us this year.  Without being trite, fishing together and landing fish together is a wonderful way to spend time with your children and it was lovely to see quite so many smiles on so many faces.

Fishing in Iceland is expensive and the increased tourism to the country means that the airport is pretty much a shambles at present so if you are going out there please do not try and arrive at the airport and go straight to the river – you will lose too much fishing time and it makes the start of the trip too stressful.  Book a night in Reykjavik and just relax into the process – it makes sense from every perspective. Iceland remains an extraordinary and beguiling country – I know I am lucky to go there every year and I also know I was very fortunate to share the experience with a top team of guests – roll on 2018 when I will be in the same place at the same time, can’t wait!