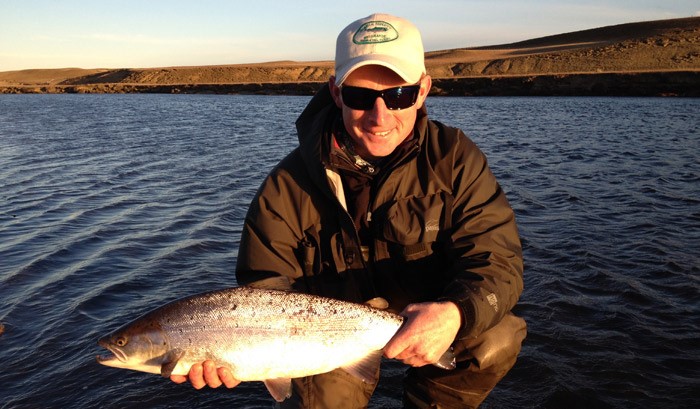 Our first group of avid fishermen returned to La Villa Maria Behety on the renowned Tierra del Fuego for their annual trip.

Our congratulations go to group leader Alf B who celebrated his 88th birthday down there.

The fishing has reportedly been hard work with some tough sessions but it improved during the week. The weather was very hot for the Rio Grande and so consequently was the water, causing lot of surface activity. The river level continued to drop which caused some concern but Colin G managed to catch the largest fish of the season to date, a superb 24.5lber. Arthur M and Roger C both had memorable sessions on which they landed 7 fish between 15 and 19lbs.

The 6 rods landed a total of 78 fish for the week, 20 of which were over the 15lb mark. Roger Y was our top rod with 24 fish landed for the week, testament to what can be achieved down there.

Floating lines were the most successful lines but in some pools it was deemed better to go deep with a short, fast sinking tip. The Wonder Bug nymph was one of the top flies along with the Green Machine, Sun-Ray Shadow, Collie Dog, EMB, Aurelia Prince, Turk’s Tarantula, Intruder and olive woolly Buggers.

At the larger lodge, Estancia Maria Behety, 122 fish were landed with 20 of those over the 15lb mark.  Skagit and Scandi lines were used with medium, heavy and extra heavy mow tips. Floating and intermediate tips were used for some pools. Nymphs like EMB, Aurelia Prince, Red-Tail, TDF Prince, Green Machine, Titanic, Black and Olive Woolly Buggers were are used. Tube flies like the Sunray Shadow and Monkey were also favourite. In the evenings, big leeches and intruders moved some fish in the evening and connected.

STOP PRESS – in the second of Alf B’s weeks, the 6 rods landed 131 fish which is a great improvement and we hope is the harbinger of things to come.

For more information on the fishing programme and prices for the weeks above please do not hesitate to contact either Charlie White or Hannah Treliving.