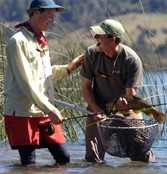 The weather continues to be fabulous, with the temperature some days pushing into 90 degrees - not uncommon for the guests of this week, as most of them are from Hawaii. Ron, David and Becky are returning guests and this time brought some friends and family. It was a fantastic week - not only weather-wise, but also fishing-wise. The rivers were getting to their perfect level, and after initially starting off with great streamer fishing, the week ended with the best dry fly fishing you can imagine. Days of 40 and even 50 fish per boat were not uncommon.

Ron, Bob, Jim and Kathy had the honor to be the first at the brand new Rio Palena Camp. They had a fantastic time. Guides Hayden and Nick took them on the famous overnight trip on the home river. The float has been running  for over 10 years now, but the new camp has really put the cherry on top of the cake. The float starts about two hours driving upstream from BaseCamp - the first day goes through some drier, semi-pampa scenery and ends up at the camp. The second day of the float continues back to Base Camp, with the scenery slowly changing to the dense rainforest which is so striking for this area. Fishing is mainly done with dry flies but some woody banks require some serious "streamer banging”, where big browns are seeking shelter.

Brothers David and Jim took setting the hook to new levels when they were floating the Rio Pico. A 17-inch rainbow trout ate David's dry fly but before he could set the hook the same fish inhaled Jim's dry fly, which was floating just a few inches downstream! Both set the hook at the same time and both hooked the same fish. We don't know who was more confused here, the fish or the anglers. Obviously there was no escaping….the fish was landed to much hilarity and jubilation by the brothers.

Becky, Ann and Carolyn, decided to trade the raft for a horse’s back for two days. They had a great time riding out of the TempleCamp close to Lago Verde. A local huaso, El Malo, guided them through some breathtaking scenery. Some of the views down on the rivers and lakes are just spectacular and give you a completely different view of the seemingly endless space of this country.