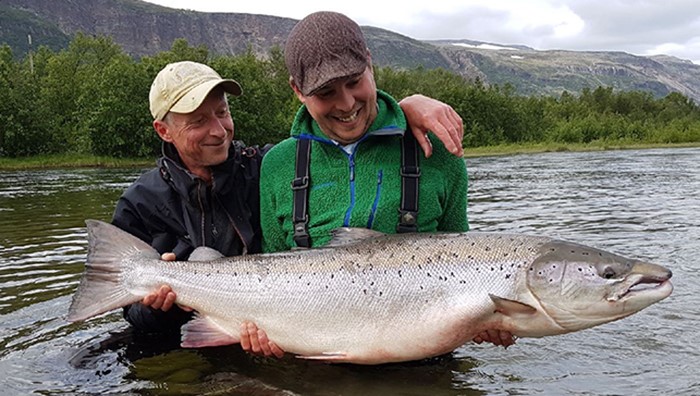 Similar to the Kola Peninsula in Russia, northern Norway also had the longest winter in over 100 years and a lot more snow than for many years. The water was therefore high and cold for the early part of the season and correspondingly catching salmon was not easy under those conditions. Norway is not known for huge catches but rather for its quality salmon and certainly 2017 has been a season that had produced some very large fish on many rivers. Well done to Roxtons client, Ken D, for landing his largest ever salmon on a visit to Reisastua Lodge on the Reisa this July. Ken has been after a big Atlantic salmon for a while and had previously fished the Reisa with us but this time he was justly rewarded with a bar of silver weighing 40lbs.

Henry Mountain recently returned from Oldero Lodge on the Lakselva, which is just slightly further north than Alta. He reports below on his visit.

I was keen to see Oldero Lodge again having not been there for several years and joined a Roxtons party at the end of July.

The peaceful private island setting was just as I had remembered it. You walk over a swing bridge across the Home Pool and the lodge and accommodation cabin is set among the birch trees just a few minutes’ walk away. There are now six comfortable rooms with ensuite bathrooms with showers. It is exactly what is required for a fishing party and more than comfortable for non-fishers. The main lodge building where you meet for drinks and meals is a couple of minutes stroll away and the chef produced some excellent food out of the smallest of kitchens for us. A monster bowl of fresh prawns as a starter one night and delicious chateaubriand. As an aside, Oldero Lodge now provides wine and beer so no extras with the exorbitant costs of Norwegian alcohol at the end of the week.

Oldero have purchased further water since I last visited. The Home Pool is double banked, a rarity on Lakselva, and following the settling of a legal dispute is now longer than it was originally plus they have leased a further stretch on the left bank at the bottom of the Home Pool. This is the first real stopping point for salmon running the river and is a top performer.

Oldero now own a long right bank stretch known as Holmen which was an absolutely stunning piece of fly water which performs well plus Swimming Pool forms part of the regular rotation. This is not the forum to describe all the water that Oldero fishes but suffice to say that they own and lease sufficient water for six rods and critically these are stretches that are known to produce big fish on a regular basis. On the fishing front, the team before my arrival landed 14 fish but astonishingly they averaged over 20lbs. One of the fish landed was a superb 46lber. My arrival at Oldero brought the sun (it has been following me all year!) and we experienced temperatures up to 25C one day. Not quite what you expect well inside the Arctic circle! One of the party landed his first Atlantic salmon, a 22lber. There are not many places where that happens. At the time of writing, early August has seem some mint fresh fish up to 30lbs landed at Oldero.

The guide team deserve a special mention. Mads heads the guide team alongside Christian and Rene. They know the river well, have an exceptional technical knowledge and are expert fishermen in their own right and will do whatever it takes to get guests into fish. For those fishermen who want to try for a salmon of a lifetime, and are prepared to forego quantity for quality, then Oldero Lodge is one to consider. With Roxtons guests at Oldero all through August we hope to see photographic evidence of more big salmon from the Lakselva before the season comes to a close.