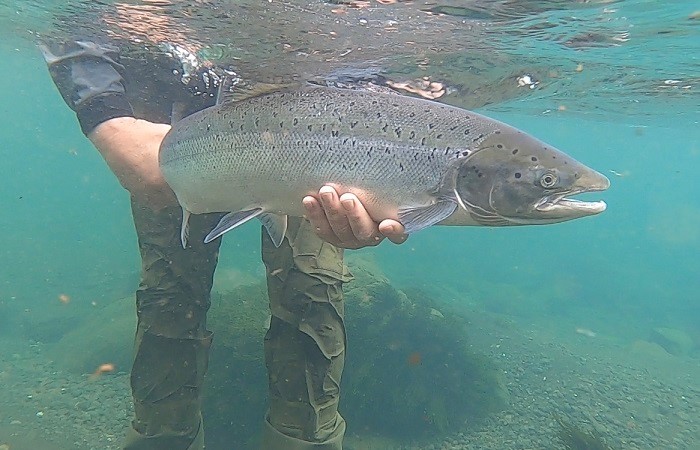 Having just recently returned from a two week visit to Iceland where I visited seven different rivers, I can report that the water levels were good on the west coast after a winter of plentiful snow and a cool and wet summer. It was somewhat of a relief to have left the UK in scorching temperatures and to arrive in Iceland where the temperatures were 14C and overcast. Ideal fishing weather of course!

The Laxa in Leirarsveit was the first river I visited, and the party of regular visitors had one of their best visits ever in terms of scores with 54 salmon and 6 sea trout up to 9.5lbs. The party’s leader did not disappoint and as ever hooked and landed a fish within minutes of me arriving. His son then followed the family tradition and landed a further three from one pool in the afternoon session. One guest had a last morning to remember with seven fish to his own rod! The Laxa in Leirarsveit is an ideal river for a private party of fishers. 7th fish of the morning

I dropped into the Nordura for a night to see how the new leaseholders were doing and as expected things were running as I would have hoped with quality guiding and the lodge running as smoothly as ever. The Nordura is a classic clear water river and the canyon section of the Nordura is dramatic in the extreme. The Nordura has reported over 800 salmon so far this season. Next stop was the West Ranga and significant upgrades have been made to the lodge. The bar and sitting area have been much improved as have the bedrooms and it is the only lodge I know of in Iceland where you even have your own TV in the bedroom. I should also add that the food was first class as it is in many Icelandic fishing lodges. One great advantage of the West Ranga is that the water levels are extremely reliable and barely change throughout the season. The river is essentially spring fed and as a result the river never colours after heavy rain. The fishing has been performing very well and just a few days ago the river landed over 100 fish to the 18 rods in one day. My visit to the Stora Laxa was a first for me. The surrounding scenery is breathtaking and many pools are surrounded by large escarpments and rocky cliffs. It is a six-rod river on the lower part and with a new lodge due to be built in time for next season it would be an ideal venue for a private party of fishermen. This is definitely a river I will be revisiting. I first visited Laxa in Kjos in 1995 and have been back many times since so it very much felt like going home for me. The lodge has been much improved in the last couple of years with significant upgrades to bedrooms and the dining room/sitting room. We had three parties of fishermen visit the Kjos when I was there and the lodge atmosphere of kindred fishing folks was frankly impossible to beat. All four beats were producing fish and some large sea trout were caught in the Meadows area which is a free beat. There were three first fish caught in two days proving that this is a perfect river in which to get others enthused about salmon fishing. It should also be noted that Siggi, the Icelandic TV celebrity chef, received much praise from our fishermen. Quality seatrout from the Meadows

The Langa is much loved by Roxtons guests and is also a classic clear water river perfectly suited to using single handed rods. The water is ideally suited to hitching flies which is great fun to see the surface takes and numerous follows that often happen. Small flies is the order of the day and sizes 14-16 were working well. From first-hand experience I can say that these techniques can also work well on Scottish rivers in tricky conditions.

Beat 6 at the top of the Langa

My last stop was the Laxa in Asum, a very prestigious river a few hours north of Reykjavik. The lodge itself was first class with many homely touches, generously sized bath towels, bathrobes and even a turn down service at night. The four-rod river did not disappoint with many salmon showing in the pools and one guest landed six salmon in a morning to his own rod. As an added bonus there is prolific birdlife including Arctic terns, ptarmigan, whimbrels, godwits and oystercatchers on the riverbank. Hooked up on the Laxa in Asum

As ever, we offer the first right of refusal for next season to those that visited this season. This typically happens in October. If you are interested in fishing in Iceland in 2023, please drop me a line to register your interest at Henry.Mountain@roxtons.com