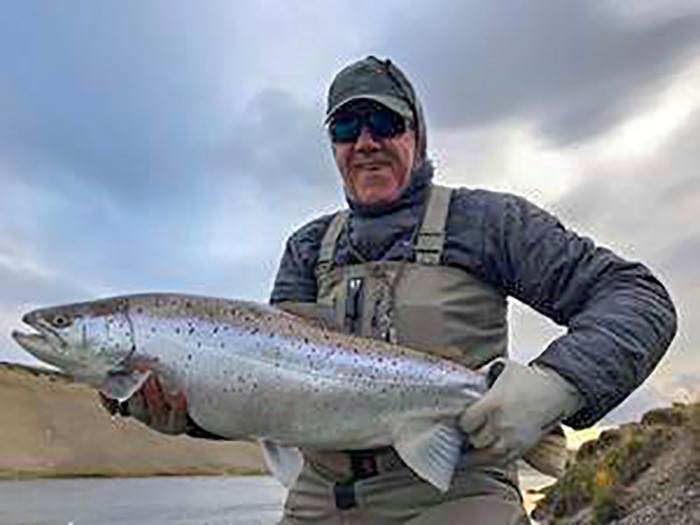 The fishing was good this week and the river is at a great level. All the fish are very fresh and we landed 70. 12 fish were over 15 pounds, 2 over 20 pounds. Average weight 10.5 pounds.

The river was getting full of fish by the end of the week, and we saw 100’s of rolling fish in the river. We expect great fishing next week.

We are still getting fish with floating lines, but sinking lines were better last week.

Top rod for the week was Scott L with 18 fish to the net, the largest 20 pounds.

Scott also landed the largest fish for the week at 20 pounds and we had some good action on skated flies to 15 pounds.

Water Levels::
Dropping but at a great level, good current in almost all the pools.

Weather Conditions:
The wind blew northwest as usual, and it was strong all week.

Air Temperature:
8⁰ to 21⁰ Celsius (48⁰ to 70⁰ Fahrenheit) very good weather during the week
Strong wind, made the river drop faster through the week.

Fly Lines:
Skagit heads with different lengths of T-14, T-11, Scandis with poly-leaders. Floating lines was worked well this last week, with nymphs and on top... The Sunray shadow with floating lines was working well drifting and striping fast, it depended on the speed of the water.

Length and strength of tippet and leaders:
7 to 14 feet, 12 to 15 pounds, dead drifting nymphs with floating and sinking lines

Most of the fish were in the lower and middle sections of the river, and we found a lot more fish in the upper part of the river. The river is full of fish, a lot more than the last week.

Notable Catches:
Some double hook-ups with floating line on top.