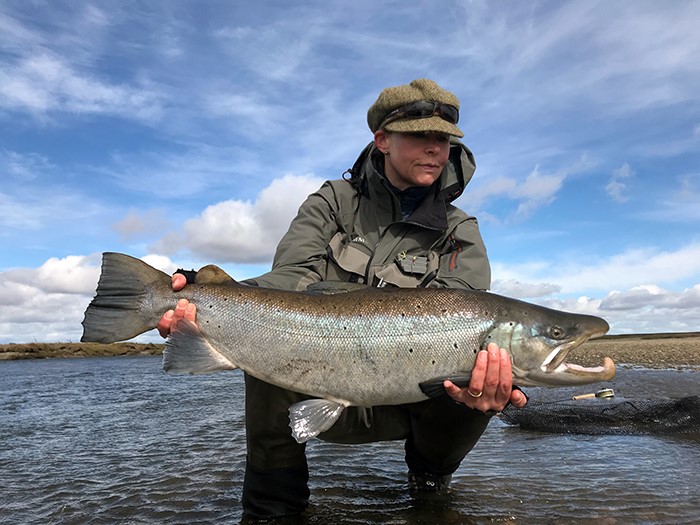 A week of two parts with good clear water up until Tuesday and dirty higher water from the Rio Menendez after. Despite the tough conditions mid week the team managed to land a very respectable 84 fish.

The Menendez is the biggest tributary of the Rio Grande and when this blows out it quickly colours the main river below the junction. That said the water was once again clear by Friday. During the higher water heavy lines and big flies were the order of the day. The upper river continues to be low with delicate presentation a must.

The team landed 29 fish over 15 pounds and 3 over 20 pounds. The average weight of fish was 11 pounds. Early in the week floating lines were great fished with tube flies but after Tuesday’s rise the fishing was mainly heavy sunk lines and at times very large tube flies. The top rod of the week was Michael H with 20 fish to the net, the biggest a lovely 19 pounds. David S and Chris B landed the biggest fish with a 20 pounder each. Most  of the fish landed were fresh. Some really lovely 17 and 18 pound fishwere lande don the flaoting line.

The water ranged between 6 and 10 degrees Celsius with good water levels now present below the Menendez but the upper river is still very low and not many fish have made it up to the upper pools.

The wind blew hard all week from the North West making the delicate presentation needed up river tricky. The wind also remained all day even in the witching hour. The air temperature was between 6 degrees and 17 degrees Celsius.

Flies that worked were: EMB, Wonder Bug, Aurelia Prince and various rubber legs. In the last hour tubes, leeches and intruders worked well as usual. Skagits were mainly teamed with T-17 and T-14