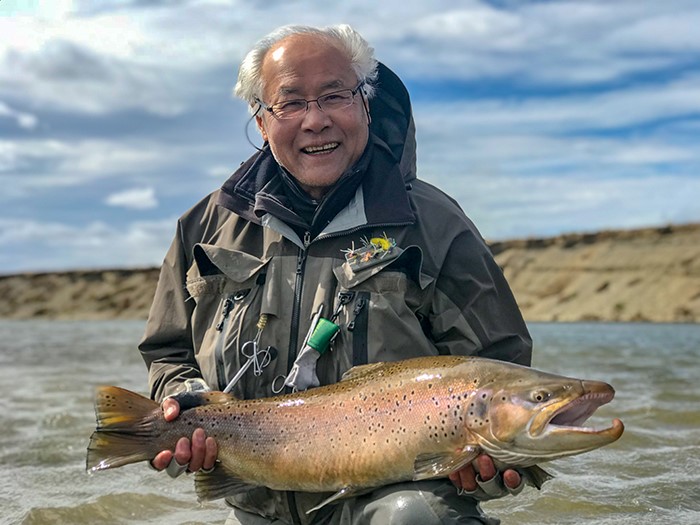 Each week the fishing on the Rio Grande is getting more productive. The river is starting to get low but below the Rio Menéndez, the river continues to have good clear flow. Last week 100 fish were landed to the 6 rods with 23 fish over 15 pounds with one fish over 20 pounds for Keith C. This gave an average weight of 11 pounds. Colin G was the top rod of the week with 25 fish to the bank with the biggest 19 pounds. As is often the case, the EMB nymph was the top fly of the week and was most successful fished in conjunction with a sunk line. Floating lines were successful again last week with a 16 pound fish landed.

The water was very clear all week with water temperatures between 8 and 18 degrees Celsius. The river is beginning to get low, especially the upper water. Below the Rio Menéndez river the flow is better with a good current and height. The majority of fish were caught in the lower and middle river with upper pools both low and less productive.

Last week saw the usual strong northwest winds which continued even after sunset. The cold and windy conditions made for tricky fishing but with 8 to 19 degree air temperatures it was largely down to wind chill.

The usual suspects were working best in terms of flies: EMB, Wonder Bug, Aurelia Prince, Rubber legs etc. In the surface various sizes of sunray worked as well as EMB nymph. For the last “Golden Hour” large tubes, leeches and intruders all did well. The green machine continued to do the business as well. Skagit heads were the main choice with varying lengths of T-11, T14 and T-17. Long leaders of 15 to 20 pounds up to 14 foot improved chances.