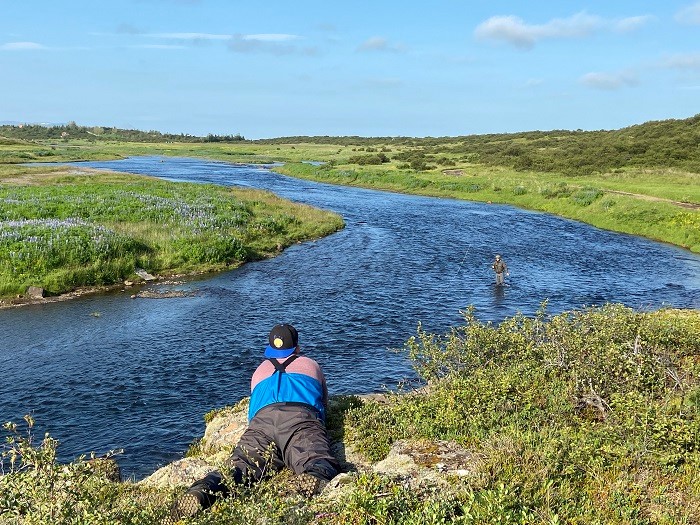 It is part of my annual routine to spend the last two weeks of July in Iceland visiting various west coast rivers and meeting many of our Roxtons fishers. This year was no exception when I hosted two groups of Roxtons rods for some prime Langa July dates.

2021 was unlike 2019 when there was unprecedented low water and warm weather and hardly a drop of rain all summer. Spring seemed to come late on the west coast of Iceland this season and the lupins were in full bloom in mid-July when I would normally expect them to be over. Water this year on the Langa, and indeed other west coast rivers, was at a good level and looked ideal for catching salmon. While things might have been on the slow side at the start of the season, there were plenty of fish in the river and lots running when I first arrived on Langa on 18 July. I saw literally hundreds jumping on my first visit to Beat 1 at the bottom of the river. All very exciting! Despite plenty of fish running, the salmon did not give themselves up easily. Rods had to work hard to land fish and for some inexplicable reason we seemed to be losing a disproportionate amount. Langa is a classic clear water west coast river with some dramatic scenery and hitched flies worked well as usual. Despite good water levels we successfully fished sized 14 and 16 flies with good effect and sometimes a micro sunray induced a take where other flies had had no success. All great visible surface action on a single-handed rod. Among the salmon landed, one stands out in particular. Beat 2 has a stunning canyon and at the top there is some fast water which spills over into a waterfall. A teenager hooked a fish in this particular pool and was playing it when he casually asked the guide how often salmon went over the fall. The response was about 1 in 40. At this point the fish decided that it was the 1 in 40 and went over the waterfall. There is quite a significant drop but remarkably the fish stayed on and despite having to negotiate some rocky outcrops and descending to the pool below, the salmon was successfully netted far downstream! It is worth mentioning that the food on Langa was simply outstanding. I don’t say this lightly and can honestly say that it was a step up from many restaurants. For good reason I didn’t dare weigh myself on my return home… I plan on hosting similar groups on the Langa in July 2022 so if this is of interest and you would like some details then please drop me a line at Henry.Mountain@roxtons.com