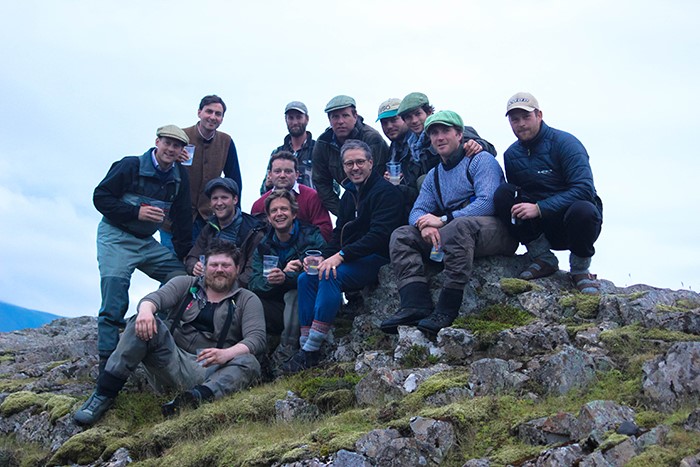 Due to commitments in Russia this summer I was forced to reduce my annual Iceland trip. What usually amounts to 3-4 weeks away was condensed into 5 nights, but what a wonderful 5 nights. I arrived into Iceland, on the late flight with Icelandair, to a good downpour of rain. After negotiating the baggage collection and hire car queues I was on the road to Kjos and despite being 19th July it was pretty dark. This was due to the huge black cloud covering all of west Iceland and making my windscreen wipers thrash back and forth. All most odd. To put this into perspective whenever I have arrived at Laxa in Kjos lodge at any time of the year the sun has been shining. To say I was excited was an understatement. Early the next morning I was amongst the clients already fishing the Kjos and reports of spate and deluge, hurricane force wind and a particularly late night had not dampened spirits the day before but with the river risen the traditional taking spots were out. Understandably my excitement was now at a steady simmer. Having packed the outgoing team off to the airport and cleared the decks we were ready to receive the next group. They arrived full of excitement and expectation and rightly so. This team has repeated with us for many years and it has rarely been the case that all the stars align. The fishing experience at Laxa in Kjos is always great but it can be testing with either loads of fish in low water or perfect water and a lack of fish running in or just hot hot sun making delicate presentation essential. This year we had the big three. Great weather, strong runs of fish and perfect water for fishing. Because of it "always" being sunny when I arrive at Kjos some of the guides muttered that it was just a matter of time before my presence brought hot weather. In fact the opposite was true and the weather got colder and windier. It is testament to the skill of the team that the howling wind on all beats one afternoon did not put them off. I had placed myself at the teams disposal as a 5th guide to help out where sharers were involved but also to run back to the lodge for supplies etc. This meant I was able to spend a session with quite a number of rods. The team leader had built “the algorithm”; a complex system that allows everyone to fish with a new partner at certain times throughout the 6 fishing sessions. So complex I fear a super computer might struggle and we as guides simply waited for instructions from the team as to where we should go. One of my first assignments was to look after Robin W on his last morning. He was leaving earlier than the rest and was given the meadows and some pools in front of the lodge as our beat. It was flat calm and the meadows needed a rest so we fished from the top of Kitchen to the bottom of Pollabreida where we hooked and landed a lovely Grilse on the hitch. This was Robin’s first Salmon on a hitch and, if not for him, it made my trip at least.

Fishing continued well with a few big fish as well as a first fish for Sam W C in Laxfoss. By day we fished hard and by night we partied. Each night we would descend on the small parking area above Kvislafoss (not fishing well due to the high water) and have a drinks party. Sometimes lashings of Sipsmiths Gin for which I’m a total convert and others were beer and whiskey. None the less the parties did in no way decrease the fishing effort in the new morning and other than the last morning we held a steady average of over 3 fish per rod per day.

What was staggering was the amount of fish lost, risen and moved to the fly. The nature of fresh fish in fast shallow water means that a certain amount will not ever make it to the net and that is part of the fun of Laxa in Kjos. For every fish you land you often hook or move 3 times that. Whilst on the subject of losing fresh grilse in the fast water there are other reasons to lose fish and in this particular case I refer to a huge slab of a sea trout in Alabakkar. It had been a very windy day on beat three and I had pushed Roly P extremely hard to keep at it. A plan was formulated to meet in the meadows for the last hour and maybe sample that evenings offering ahead of time. I hate to see fisherman sitting idle when the river is in good nick so I rigged up a sea trout rod including the KC special nymph. As if scripted Roly began to tell George P how boring fishing the meadows was as a huge sea trout smashed the KC nymph and took off round the pool including a couple of decent jumps to show off it’s leviathan size. It took itself off to the deeper bottom end of the pool and settled into the bottom. Sadly it had wrapped itself around a rock. To cut an hilarious story short Roly ended up swimming out to try to free the monster and whilst we will never know how heavy it was I had fitted him out with a 16lbs tapered leader… The team ended on 63 salmon after what was a wonderful 3 days. I hope they all enjoyed it frankly as much as we did as a guide team. Peter Rippin was hosting a team on the north east coast and was shocked and amazed to hear me in such excited spirits about the prospects when he called. I have now seen 11 years at Kjos and whilst have all been excellent in their own way this was excellent in every way.