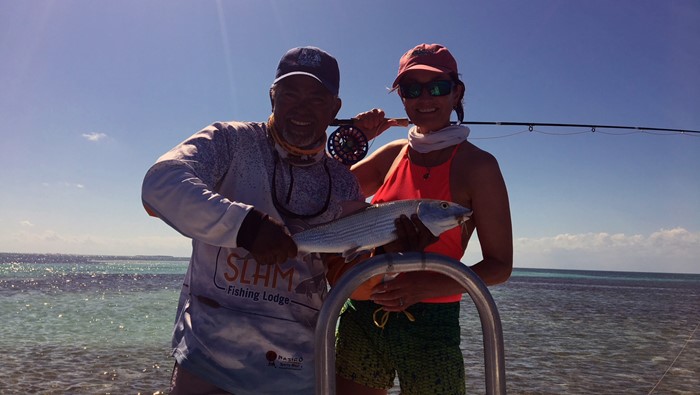 An easy flight from Manchester brought us to Cancun Airport a little later than scheduled. But we were met by a very jolly Mexican driver with an air-conditioned mini bus, and a mobile phone to help translate. Two hours later we arrived on a pontoon just outside Talum, and did the last hour of our trip to Grand Slam Fishing Lodge in a skiff round the mangroves, totally beautiful way to arrive. Huge Americanised bedroom, with excellent shower and freezing cold air-conditioning, the communal bar/eating area with balcony onto the beach was pretty fab too.

Great guides, we caught bonefish, trigger fish (which they had never thought to try and catch), cast at lots of permit, and at tarpon in the channels. Sadly no migratory bigger fish in residence, this was February, but gather you can luck in to the bigger ones later in the year. We had real fun in the early evenings casting at rolling tarpon from the beach in front of the bar, into a strong onshore wind, up to our chests in the sea. Lots lost, I was lucky enough to keep mine on, playing it in front of a small throng of fishermen, all shouting their advice!

Professionally run lodge with nice guides, fishing might yield better sizes later on in the season.