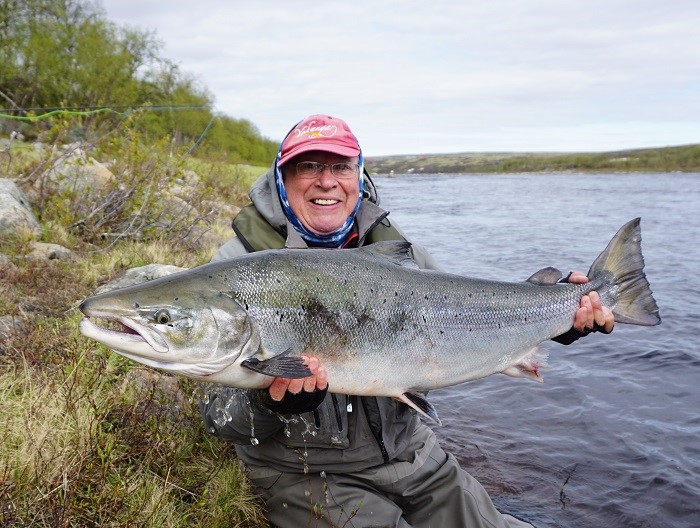 To say that Phil was a keen fisherman is an understatement but there were many other parts to Phil too; as a family man, as a successful businessman, and as an amateur rally driver before latterly becoming an angler. He first started to fish during the 90’s when rallying was still his principal hobby. It was not until after the turn of the century that he remarked to me that he felt it was time to think about ending his rallying and devoting his energies and considerable enthusiasm to salmon fishing. Not one for doing things by half he was soon spending time with such accomplished anglers as Jim Fisher, learning to cast with skill and at the same time soaking up a deep understanding of the sport that led to what Jim Curry described as that rare combination of knowledge and ability.

In the early days he fished with his friends here in Scotland, on the North and South Esks, the Tay, Spey, Tweed, Dee and Ness and of course the Beauly where he became a dedicated and valuable member helping run a syndicate where last year he celebrated his 73rd Birthday by landing a 14lb fresh run salmon – much to his delight. But his arrival in the sport coincided with the opening up of many foreign angling venues and in 2003 a trip to Kharlovka in Northern Russia began a zest for foreign fishing adventures. By 2019 he had fished 37 weeks on virtually all the major salmon rivers there; Kola, Rynda, Kharlovka, Eastern Litza, Ponoi, Varzuga and Kitza, and his many highlights included a fish of 29lbs from the Yokanga in 2014.

But he was also now casting his lines far around the world, broadening his horizons in every sense. Chasing Kings and Dolly Varden during his “annual pilgrimages” to the Goodnews in Alaska, a river that after seven hours of commercial flights across the Atlantic then took a further two and a half hours flying time across mountains and glaciers in a 1941 Douglas Dakota to reach. There were Chinooks to be caught on the Vodudahue River in Chilean Patagonia, sea trout in Argentina, huge carp in Thailand and closer to home big Atlantic salmon on the Lakselve and Osen in Norway. In all during these past two decades he spent 60 weeks fishing abroad and after each trip he would compose an entertaining essay recounting  the highs and lows he encountered but always acknowledging how lucky he felt to have had the opportunities that these fishing led adventures afforded him.

His arrival in the sport also coincided with huge developments in fishing tackle, something he embraced with a technical dedication few could match. All the latest rods, reels, lines and tips passed through his big hands from his first Diawa Whisker to the Guideline NT8 that he latterly swore by - and his collection of fishing flies was spectacular, a pattern and size for every river in every weather and to suit its condition, and if success was unforthcoming, a solution (perhaps) was always at hand to lift any flagging spirits. This once worked with great results on a day when fishing Ponoi during an October visit. The osenkas were running hard and he was losing fish after fish. Reaching into his bag he pulled out a box of very large very traditional singles, and much to his guide’s horror, selected one to attach to his leader. “They’ll not be dropping off now”, he announced, and promptly landed five fish in quick succession.

Those who fished with him knew him as a generous and kind fishing partner, always effusive with his congratulations when fish were caught. But he was also extremely gregarious, a splendid companion to have around whether that be in a highland fishing hut at lunchtime or a foreign lodge for a week. He was first to ask how everyone else’s day had gone, and last to call it a day, to the extent that he once missed almost an entire day’s fishing on the Varzuga having sat up long into the night sharing stories and vodka with his new Russian friends.

People in angling the world over will miss him, his cheery presence and his unrestrained enjoyment of life. Last March he arrived on the banks of the Tay to fish with us, explaining as he did so that he had to postpone a trip to hospital to accommodate the outing. His nurse rebuked him with “but Phil, this is about your life”. He replied, “Fishing is my life”. And life should be lived as Phil lived his.