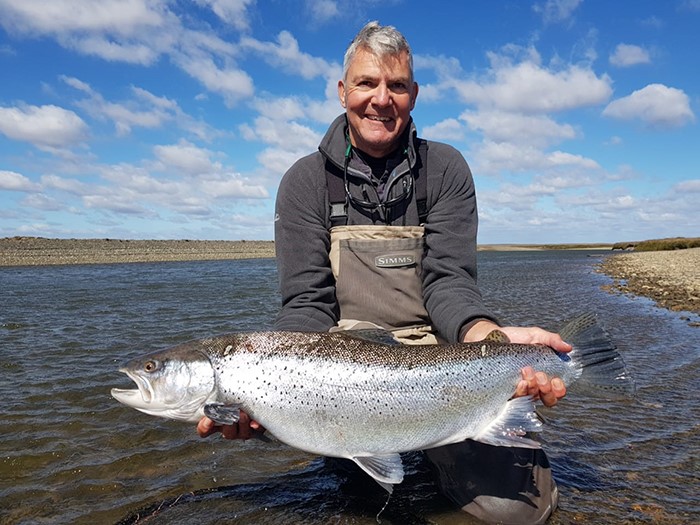 Another great guiding week has ended. We had some very good old friends from England and the US. Fishing was very good most of the week. The weather was quite unstable this week: sunny, windy, overcast and a lightning storm. The upper river is now very low with Little flow in the pools but the lower river, whilst low, is clear and has a good flow. La Villa caught 90 fish for the week with 25 fish over 15 pounds and 5 over 20 pounds. At Estancia Maria Behety lodge landed 141 fish with 24 over 14 pounds and 3 over 20 pounds.

The wind was strong last week. Mainly blowing from the north west the wind speed ranged from 10-80 km/h. Wednesday was particularly strong from the North. Air temperatures were between 6 and 18 degrees celcius. The river was between 7 and 12 degrees celcius and dropped about 3 inches during the week. Skagits and tips like T14 and T17 along with full floaters are the norm. With water getting lower scandi bodies with tips are advisable do reduce disturbance although still worth going a grain rating above to combat the wind.

At La Villa de Maria Behety the top rod was Roger Young with 40% of the week’s total. The biggest fish was 21 pounds. At Estancia Maria Behety lodge Tony Bennet landed a 22 pounder, Doug Limburn landed a 20 and Pat Woods landed a 20 also. All in all a good week despite dropping water and tough winds.