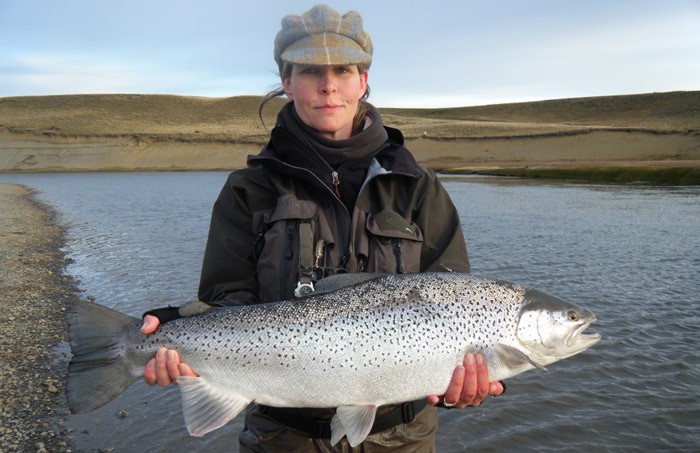 Last week was another triumphant week at La Villa de Maria Behety and the Estancia Maria Behety on The Rio Grande in Argentina...

David S, Richard M, John & Karen R, Chris B and Mike H all returned to La Villa for what proved the best week of the season so far. The average weight of fish caught was 8.8lbs and 24 were caught over 15lbs and 3 were over 20lbs.

The weather has continued to be cooler than normal, with air temperatures between 6°C and 15°C. Water temperatures improved, ranging from between 7°C and 14°C. The wind blew quite hard but there were some periods of calm.

Our congratulations go to Karen R who hooked the biggest and most fish for the week. She landed 36 fish overall, the largest of which was a mammoth 26lbs male. Karen’s father, David S, was close on her heels as he landed a very impressive 32 fish throughout the week.

Mike H had a fish on every session so now joins Roger Y in the exclusive NBSC (No Blank Session Club). Chris B was very close too as he had fish on 11 of the 12 sessions, but alas membership evaded him – next year perhaps!

The average weight of trout landed at Estancia Maria Behety last week was 9.3lbs, with 26 of those being over 15lbs and 4 over 20lbs.

Nymphs were the flies of the week for the rods at the Estancia and for the last hours of the day big leeches, intruders or tube flies worked best. There is still some availability left for this season.