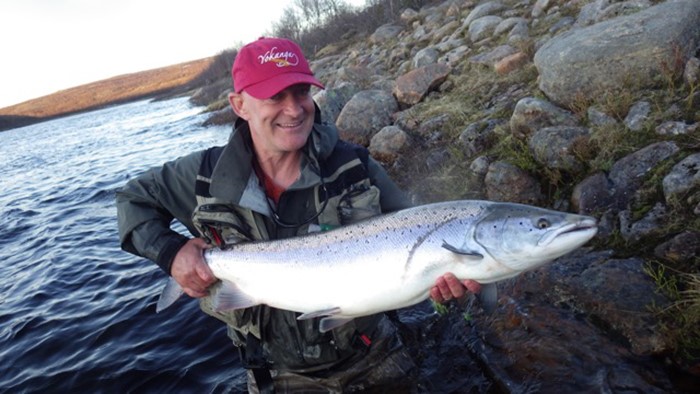 2017 was one of the most unusual seasons that any of us have ever experienced in Russia. It was the longest winter in over 100 years and combined with that there was more snow on the tundra than for many decades.

For the first time ever we had to cancel the first two weeks of the Yokanga Lodge and Gremikha Camp seasons for safety reasons and with the quantity of snow on the tundra slowly melting, the water was exceptionally high and cold throughout until early July. Levels were 2m over what might be considered normal and water temperatures were lingering around 5C most of the time. With that extra volume of water, without seeing it first hand it is hard to imagine how the river can transform normally slow lake sections of water into a torrent where you can barely consider throwing a fly. The fishing was correspondingly tough from Yokanga Lodge in those early weeks. As one guest summed it up, you are looking for a very small needle in a very large haystack. While conditions did not favour the lodge in the first part of the season, the Gremikha camp, which fishes the lowest 8kms of the river, did much better than usual. It was hard to find fishable water, but fish were entering the system and the early fishermen contacted them in small pockets. The comments below from one client give you a flavour of what was happening down at Gremikha. I had a truly amazing afternoon yesterday. There were 7 fish caught by the camp. I had 4. 18lbs, 18lbs, 20lbs and 29lbs. I lost another 3. One was lost after a few minutes, another after 25 minutes and another after 45 minutes which we never even saw. I spent 4 hours playing fish between 2pm and 7pm...only spent about 15 minutes casting...the remaining 45 minutes was spent watching Arni play a fish. It was only a 20 yard pool! I connected with another 10 fish, almost a connection with every cast. Quite simply the best afternoon's fishing I have ever had. I actually got cold because I spent so long standing still playing fish! Crazy to think that, in years to come, when someone asks me about my bonanza day and where was the lie, that I am going to have to point 10 feet up the hill to dry land! July certainly saw some improvement in the fishing as the river height dropped and fresh fish were able to push on into the middle river. The water, although dropping, remained high by normal standards and while there were some good days and some excellent fish caught, lodge guests never really got amongst them.

Interestingly, the fishing at Gremikha remained good in July. Traditionally as soon as the Yokanga warms up, say to 10C, then most of the salmon just race through the lower river and the lodge water is definitely the place to be. Who knows if the water was sufficiently high to slow them up for Gremikha guests to catch them or whether some of the earlier rod caught fish were still holding down there and were in turn stopping the new arrivals. Either way, Gremikha did significantly better than average in 2017.

Our last week of the season at the lodge was 29 July-5 August and in some ways this was the best week of the season for Yokanga’s largest fish. Three fish over 30lbs were actually landed and a further half a dozen or so of a similar size were hooked and played for some time before they were lost – one very notable fish estimated at nearer to 50lbs than 30lbs. Judging by their colour, these excellent condition, predominantly cock salmon appeared to be June fish but for one reason or another it was seemingly not until early August that they were populating the traditional prime middle river lies.

In terms of numbers, the Yokanga Lodge fishers landed 458 for the short 7 week season. By way of comparison, Yokanga Lodge’s long term average catch is 900-1200 fish in a 9-10 week season. 2017 saw 46 salmon in the 20-29lb bracket landed and 5 in excess of 30lbs. Whilst it was generally a very disappointing season for the Yokanga fishers, guides, lodge staff and of course for us, it is important to keep these things in perspective. On average more than half the fishermen who fished Yokanga this season left having landed a fish over 20lbs. An enviable statistic even in a poor year. As fishermen we are good at trying to seek explanations for a below average season. Fear always exists of poaching, seals and other factors that can affect the success of the runs and the fishing. The fact is that not every year can be a great one and a degree of variation is entirely normal. The conditions in the early season were certainly highly unusual and the timing of the run’s arrival at the lodge was clearly disrupted. Tributaries that are normally low and less than ideal for salmon to run up when they arrive, were in full flood this season so it is entirely possible that the fish simply ran up them as soon as they arrived. The Lyliok river itself is a good example and is one of the major spawning tributaries. Normally the fish get bottled up in Lyliok at the lower end of the Home Pool and as a result that is a productive pool but that was not particularly the case in 2017.

The lodge was running as smoothly as ever thanks to Pasha our Russian camp manager. It was the second season for Yuri the chef and he received widespread praise from guests, many of them saying that it was the best food they had had on any Russian river. The inclusion of wine, beer and vodka in the package price has been universally popular funnily enough! I would also like to take the opportunity to thank Toby Burrell and Iain Kirk who did an excellent job in hosting guests throughout the season and who also received numerous mentions from returning fishermen.

There remain compelling reasons for choosing the Yokanga. It remains one of the world’s great rivers for truly big Atlantic salmon. Over the previous five seasons we have seen an average of close to 140 fish over 20lbs caught every year to just over 100 rods a season. Those are pretty decent odds. The fishable water from Yokanga Lodge is extensive and indeed it is rare to cover all the available water on your daily beat. The use of boats, both for fishing and for movement downstream, makes the Yokanga accessible to many and the lodge, set in wilderness location, has a commanding position overlooking the river with comfortable bedrooms with ensuite bathrooms.

Of one thing we can be fairly sure, 2018 will be different to the one we just had and likely different to other seasons in some way or other. We, along with our Russian partners, will do all we can to ensure the river is well protected and that the guides, staff and lodge are ready to welcome Yokanga’s fishermen. Whatever nature then delivers us, there will certainly be some good fishing and, as always, a number of fishers will land the salmon of their lifetime. We look forward to welcoming back old friends who have been there before and to introducing some new guests to the experience of fishing a river such as the Yokanga.