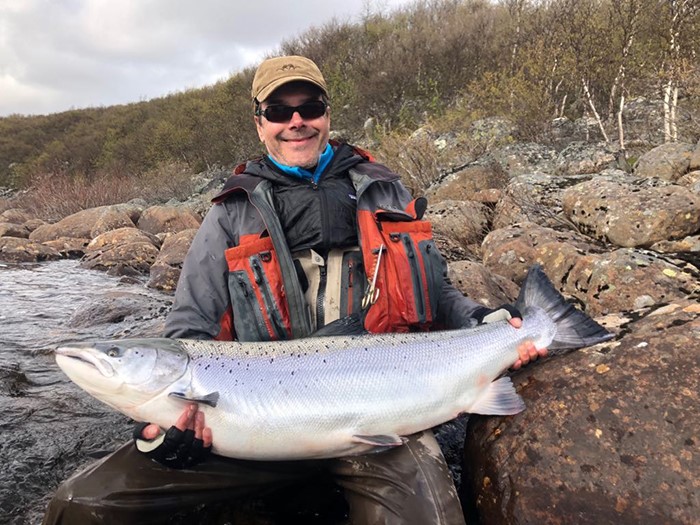 The first week of June (Week 0) was the opening week of the season and was cold and with high water, so classic spring conditions hunting for smaller numbers of quality fish straight in from the sea. True to form a couple of huge fish were hooked and lost. One of them being a vast fish of about 40lbs, hooked and played by Michael F at Sand Island. During the battle the fish leapt repeatedly, more like a summer grilse, before throwing the hook!

The following three weeks of June saw some of the prime weeks of the season perform incredibly well with the main runs of large multi sea winter salmon. All the fish were in truly excellent condition, fat and fighting fit and guests reported 12-15lbers tearing off into their backing and giving them a seriously good fight. July saw some warmer weather and rapidly dropping water levels and it was noticeable that the cooler days produced the larger fish. With a strong run of grilse and numerous smaller multi sea winter fish in the 8-15lb bracket, the July weeks were among the most productive of the season. The grilse were in superb conditions, really deep for their size and aggressive to the fly. The river as a whole produced 823 salmon to the 87 rods that fished with us on the Yokanga in the 2018 season. That included 121 in the 20-29lb bracket, 12 of 30-39lbs and 1 over 40lbs. A total of 134 in excess of 20lbs or 16% of the entire catch across the season! The numbers demonstrate that the Yokanga is undoubtedly one of your best chances anywhere in the world to try for a large Atlantic salmon. The largest of the season was an incredible fresh salmon landed by Ismo U that measured 112cm x 68cm (44 x 26.5 inches) and that went in the book at 41lbs. They are too numerous to list but notable fish over 30lbs included a 32.6lber for Marcus S from Upper Norcamp, a 34lber for Roger T from the first island of 7 Islands and a 34lber from Crow’s Nest in early July for Jim C which was his very first Atlantic salmon!

What the figures above do not tell is the sheer number, quality and fun had with the numerous salmon under 20lbs that do not catch the headlines. One glance in the record book and you can see rows of salmon in the mid to high teens. These can be aggressive takers and will test both your ability and tackle. The nature of the river with its rapids and boulders is that the biggest fish have the advantage. Inevitably there were stories of big fish that came unstuck. Colin S hooked and lost what he considered to be the largest fish he has ever hooked on the Yokanga and he has landed plenty of 30lb salmon there over the years. He hooked it close to the bank in Lyliok and it towed him up and down for 15 minutes and breached in full sight of him and Big Andrei before coming off. Colin was near speechless on his return to the lodge that evening! That loss was hot on the heels of another smaller fish the same day for Colin that wrapped him around a rock and broke him. Other guests broke rods when playing fish and some people were on the receiving end when good sized fish disappeared into rapids and had them running down the bank after them. We much look forward to more of the same in the 2019 season. If you are interested in joining us on the Yokanga next season, please do get in touch soonest as there are limited rods available.